(Client names have been randomly changed to a letter to protect their identity.)

To an outsider, it’s a pretty casual meeting on a recent late summer morning. It would be easy to assume clinicians Ashley Hammond, Angela Saitta, and Tara Dennis, and Clinical Supervisor Brian Lindner are discussing family or friends or catching up after a holiday weekend. Until you listen a little closer.

“She’s been stable, but she does have an upcoming (appointment), so we want to follow up on what her plan is for that,” Angela says of Client D, who they’ll be seeing today.

“I’m concerned he may be drinking again because I got a text from him … after missing his home visit,” Ashley says about Client H, who she’ll be seeing this morning.

They celebrate another client who has taken the initiative to contact the Social Security administration on his own: “He is capable of that.”

Another client may not be able to make their rent payment this month, and the team explores programs that may be able to help her.

The team shares a moment of victory as they hear a client will be returning after being out of contact for a while after a medication change.

“He’s back in (the area),” Angela shares, before the conversation shifts to the best way to connect with him.

“He likes music,” Angela says. “I’ve talked to him about Game of Thrones.” 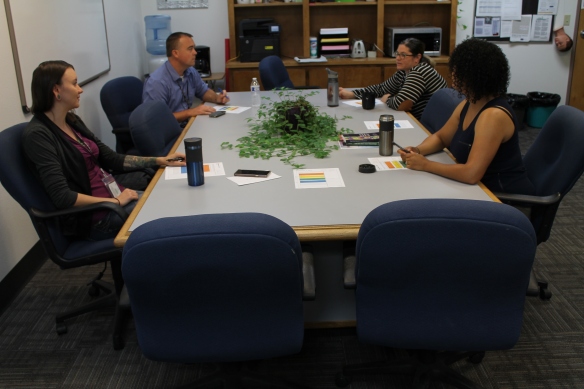 For clients served by the Idaho Department of Health and Welfare’s Region 3 Assertive Community Treatment (ACT) team, mental health support and treatment doesn’t look like what many people may think of as typical counseling or medication management. The team isn’t preparing for a day of office hours and appointments; they are planning for the 16 clients they will be meeting in the community on this day – some at home, some at work, others in challenging living situations because of their serious and persistent mental illnesses and resulting symptoms. END_OF_DOCUMENT_TOKEN_TO_BE_REPLACED

Follow DHW: Promoting and protecting the health and safety of Idahoans on WordPress.com