Talk. Test. Treat. This is national Sexually Transmitted Disease Awareness Month and those are three simple things you can do to protect your health. Most people don’t really want to talk about sexually transmitted diseases, but the truth is that a hidden epidemic of STDs is happening in this country – and here in Idaho – right now. The Centers for Disease Control and Prevention estimates that 20 million new infections happen each year, and that there are now more than 110 million sexually transmitted infections in men and women in the United States. STDs can cause infertility, stillbirth, neonatal death and other health issues.

What are some of the most common STDs in Idaho? 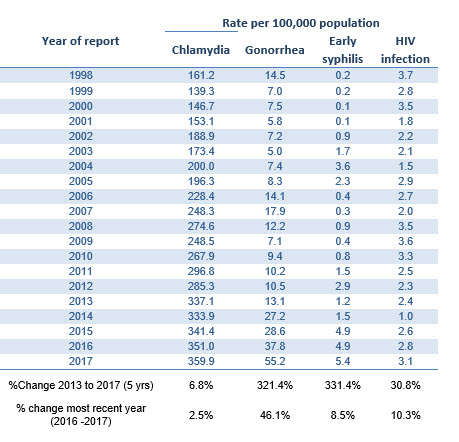 What are some of the reasons for the sharp increase in STDs in Idaho?

The rise in STDs, particularly gonorrhea and more recently syphilis, parallels an increased availability and use of mobile dating applications. The Pew Research Center reports approximately 15 percent of U.S. adults have used online dating sites or dating apps and the use of online sites or apps for dating has nearly tripled since 2013 among persons aged 18–24 years. Some apps can facilitate anonymous sexual encounters, making partner notification, testing, and treatment for those with or exposed to STDs complicated and inadequate to reduce the spread of the disease. Additionally, we are seeing signs of decreasing condom usage. Condoms provide a reliable reduction in STD risk when used, but only about 34 percent of adults with high risk sexual behaviors use condoms and decreases are being reported among young people and gay and bisexual men.

Who is most at risk?

STDs affect people of all ages, but sexually active young people ages 15-24, and gay and bisexual men are most at risk and should take precautions like using condoms and getting tested regularly. More than half of the STD cases in the U.S. are in people younger than 25.

How do I know which tests I might need?

You should talk to your doctor about the tests you might need, but make sure you ask. Many doctors won’t give HIV or STD tests unless you ask for one. If you are not comfortable talking to your regular doctor about getting tested, there are many clinics that offer confidential and free or low-cost testing.

There are probably a lot of different symptoms for each STD, but are there general things to watch for?

Many STDs don’t cause any symptoms, actually, so the only way you know your status for sure is to get tested. When symptoms occur, they vary depending on the disease.

Many who have chlamydia don’t develop symptoms, but they can still infect others through sexual contact. Symptoms may include genital pain and discharge from the vagina or penis.

Symptoms include painful urination and abnormal discharge from the penis or vagina. Men may experience testicular pain and women may experience pain in the lower belly. In some cases, gonorrhea has no symptoms.

The first stage involves a painless sore on the genitals, rectum, or mouth. After the initial sore heals, the second stage is characterized by a rash. Then, there are no symptoms until the final stage which may occur years later. This final stage can result in damage to the brain, nerves, eyes, or heart.

Where can I find a clinic so I can get tested?

You can visit to find testing sites in your area by going to the website https://gettested.cdc.gov/  STD testing is often covered by health insurance, and some health centers and local health departments offer reduced pricing based on income. Remember Talk. Test. Treat!

A Closer Look at Your Health airs weekly on KBOI AM 670 in Boise; this is a longer version of the transcript from the April 17, 2018 program.