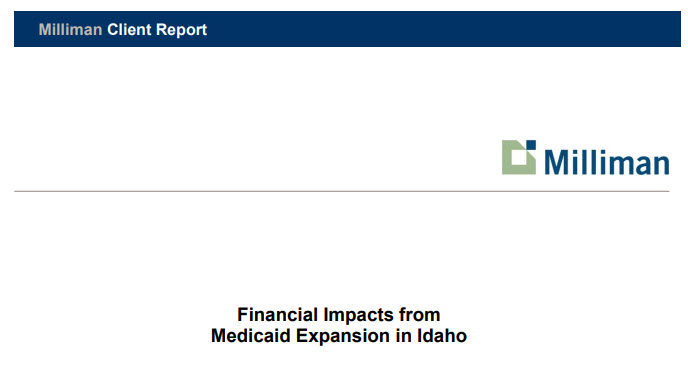 The Department of Health and Welfare has released a new report titled “Financial Impacts from Medicaid Expansion in Idaho,” from Milliman Inc. The actuarial firm analyzed the cost impact of expanding Medicaid in the event a voter-initiated ballot measure passes.

The report indicates that Medicaid expansion in a single year (using the second-year costs because it represents the first year of full implementation) would cost the state about $45 million but will also generate about $40 million in state and local fund offsets. The single year net cost to the state will vary year over year, but the net total 10-year cost estimate from state fiscal year 2020-2030 in state funds is $105.1 million, once costs and savings are accounted for.

The following are Frequently Asked Questions related to the Milliman report and Medicaid (New questions and answers are added periodically to the end of this list):

What is Idaho Proposition Two?

Idaho Proposition Two is an initiative to provide that the Department of Health and Welfare shall amend its Medicaid state plan to provide healthcare coverage to certain people, specifically adults with incomes of up to 138 percent of the Federal Poverty Level (FPL) as described in the Code of Federal Regulations. The initiative was qualified for the 2018 election ballot by the Idaho Secretary of State’s office and voters passed it on Nov. 6, 2018. The ballot text of Proposition Two is here.

What is the Idaho Department of Health and Welfare’s position on Proposition Two?

As an agency of Idaho state government, DHW does not have any position intended to influence the outcome of Proposition Two. Under Idaho Code Ann. § 67-5311, no classified employee of a state department shall use their official authority or influence to interfere with an election.

NEW! Now that voters have passed Proposition 2, when will it be implemented?

Assuming the Governor’s Office and the Legislature do not make any changes to the language in Proposition 2, DHW will implement Medicaid expansion on Jan. 1, 2020.

The next step will be for the Governor’s Office and the Legislature to decide how to fund the state’s share.  If no changes are made to the legislation, the department would submit a state plan amendment to CMS “…no later than 90 days after approval of this act…” as directed by what would then be the statute.  The department does not anticipate receiving any appropriated funding until July 1, 2019. When it receives the appropriation, the department would start the work to implement based on the legal requirements in the appropriation and statute. Our eligibility process is fully automated, so implementation would include changes to the eligibility system, Medicaid’s system, and the system used to receive the federal payments for each participant. Each would have to be tested and verified to make sure eligible Idahoans receive their Medicaid benefits.

Individuals who are enrolled in private insurance on Idaho’s Insurance Exchange should continue to shop and select a plan for 2019 to ensure coverage for 2019.  DHW will work collaboratively with your Health Idaho on coordination for changes effective for 2020 plan year.

What has DHW done to analyze the potential financial impacts to Idaho if Proposition Two passes and is implemented by lawmakers?

As the state agency administering the federal Medicaid program in Idaho, DHW used its existing actuarial contract with Boise State University to analyze the cost impact of expanding Medicaid in the event Proposition Two passes. Milliman Inc., the actuarial firm Boise State subcontracts with, did the work. The firm had provided similar reports for Idaho on the cost of Medicaid expansion in 2014 and 2016 when inquiries from the public about the cost of expanding Medicaid in Idaho were raised (see links to these reports in “Resources” below).  DHW worked with Milliman to update the report and cost projections based on the current economic environment and the specific proposal in Proposition Two.

What is the Milliman Report?

Milliman Inc. released its Proposition Two financial analysis in a report to DHW on July 19, 2018. It is titled “Financial Impacts from Medicaid Expansion in Idaho,” and is available here.

What were the findings of the 2018 Milliman Report?

The report indicates that Medicaid expansion in a single year (using the second-year costs because it represents the first year of full implementation) would cost the state about $45 million but will also generate about $40 million in state and local fund offsets. The single year net cost to the state will vary year over year, but the net total 10-year cost estimate from state fiscal year 2020-2030 in state funds is $105.1 million, once costs and savings are accounted for.

Why did previous Milliman reports on expanding Medicaid in Idaho assume the Catastrophic Health Care Fund (CAT Fund) and counties medically indigent funds would be eliminated?

Several things have changed since the last Milliman report (2016) was published. Currently, there is no financial penalty for not having health insurance. When the previous reports were developed, the individual mandate was enforced, so the assumption was that people would either be covered by insurance or Medicaid. Also, premium increases have made it less affordable for individuals who don’t qualify for assistance to afford to purchase coverage, increasing the number of uninsured individuals over 138 percent of FPL. These changes have had an impact on the catastrophic fund, making the elimination of the program less predictable without legislative and county action to end the funding permanently.

Can the CAT Fund program or the Medically Indigent Funds program be eliminated?

An elimination of the CAT Fund and the Medically Indigent Funds would require a change to Idaho Code.

Why was the Idaho Department of Corrections (IDOC) recidivism reduction removed from the latest report — are the projected savings gone?

Medicaid expansion will provide substance use disorder treatment to a greater number of offenders in the community than what is currently appropriated to IDOC by state general funds. Research indicates that offenders who engage in treatment are less likely to recidivate, which would result in a future cost avoidance for the state because a percentage of those offenders would not return to prison. Because of a significant number of variables, such as total treatment funds available, recent Behavioral Health treatment funding increases, optimum amount of treatment required per offender, and availability of community supervision resources, it is difficult to project and quantify this future cost avoidance.

Why are the per-member per-month cost assumptions different in this new report compared to earlier cost projection reports?

The January 2016 Milliman report was based upon emerging cost data that was reflective of 2015, the second year of Medicaid expansion under the Affordable Care Act, with additional adjustments for the new treatments covered for Hepatitis C. At the time of the 2016 report, data was still being gathered on the durational effects of implementing expansion, while today there is more expansion data available upon which to base calculations. There was a Milliman report update on Nov. 18, 2016, that incorporated additional cost adjustments for durational effects of implementing expansion.

With the Dec. 3, 2014 Milliman report, data on the cost of various options for delivery of care reflected very early emerging experience of high costs for some states that expanded Medicaid in January 2014. At the time, there was insufficient data to determine the level of pent-up demand influence versus the steady state cost of care.

The new July 19, 2018 Milliman report incorporated additional cost adjustments for observed durational effects of implementing expansion and reflects better informed cost assumptions from the 2017 calendar year of actual experience from states with expansion populations. Now that the emerging cost data from states that expanded Medicaid has matured, cost impacts relating to the duration of participation within the program can be most accurately modeled.

Proposition 2 would have no impact on expanding Medicaid-covered services for pregnant women. Under the Idaho State Medicaid plan, pregnant women under 138 percent of the Federal Poverty Limit are already currently eligible for Medicaid. Abortion procedures are not covered under Medicaid services for pregnant woman seeking abortions. Federal law only allows Medicaid coverage for abortion procedures in cases of life endangerment, rape or incest as established in the Hyde Amendment. Cases of rape or incest must be determined by a court or documented by a report to law enforcement, with the exception being if the rape or incest was not reported to law enforcement, a licensed physician or osteopath must certify in writing that, in his/her professional opinion, the woman was unable to report the rape or incest to law enforcement for reasons related to her health. Medicaid pays for an average of one abortion per year in Idaho under the federal criteria.

Do Idaho Medicaid insurance benefits cover over-the-counter  contraceptives, which can prevent pregnancy after intercourse, such as the “Plan B” pill?

How is eligibility for Medicaid coverage determined?

To receive health coverage from Idaho Medicaid, you must complete the application process and meet certain eligibility requirements. You must fit one of the following categories:

If you fit one of the categories above, you must also meet the following eligibility criteria:

When Idaho residents apply or are re-evaluated for Medicaid coverage, the department needs proof to verify the information the applicant has provided is truthful. In some cases, such as U.S. citizenship verification, DHW can use interfaces with U.S. Homeland Security or state offices of vital records to verify citizenship status. When interface information is not available, applicants are asked to provide documentation to prove the information provided on the application is true.  To see a list of the documentation required for verification, click here.

Who is mostly likely to enroll if Idaho expands Medicaid?

Eligible enrollees are those individuals in households earning less than 138% of the federal poverty limit (FPL). The population of Idahoans who fall under 138% of the FPL will no doubt change over the 10 years modeled by Milliman. Economic factors, especially employment and population growth, will drive changes in the size of the enrollment population. The Milliman analysis assumes the enrollment will grow at a constant and steady rate every year.

Do the enrollment assumptions include participants currently eligible for social services?

The enrollment assumptions represent a comparable forecast based on participation of both current Idaho programs as well as other similar Medicaid expansion programs in other states. The enrollment assumptions are informed by current usage of Supplemental Nutrition Assistance Program (SNAP) as well as the individuals processed for eligibility relating to Healthy Idaho. The actual participation within Medicaid will vary from these assumptions due to a variety of economic factors.

What was the basis for Milliman’s enrollment assumptions?

Milliman used demographic information from Idaho as well as historical Medicaid expansion take-up rates to model the enrollment assumptions. The fact that Idaho can incorporate the experience of other expansion states gives Idaho that much more clarity into likely enrollment.

How did Milliman arrive at the total expenditure estimates?

The total expenditures are based on the assumed number of enrollees in the Medicaid expansion program, the average benefit cost per enrollee, and the administrative cost for the program. These expenditures are offset by the cost reductions or savings from the reduction of various state and local programs. The Idaho Department of Health and Welfare collaborated with other relevant programs and agencies to estimate the total cost reductions.

Will the expansion costs trend the same as current Medicaid programs? How about compared to the health exchange?

The expansion cost trend would not correlate to either the existing program or to the health exchange because they are different programs and populations. Current Medicaid programs cover a limited population including children, pregnant women, and disabled individuals. These populations have unique needs and characteristics that are different from the expansion population. Meanwhile, rates on the exchange can be driven by a number of factors (e.g., contracts with hospitals) that create different cost dynamics.

Jan. 8, 2016 Milliman Report: 2015 Financial Impact of the Medicaid Expansion on the Idaho Medicaid Budget Including State and County Cost Offset