Playing louder and louder, she reaches the point where all 10 fingers are crashing down on the keyboard. Kate and Client N reach the end of the notes on the page, and Client N takes a deep breath. She finishes the song dramatically, in grand concert style, with a final decisive strike on the keys – wrists arched, fingers straight in little teepee arrangements, head thrown back triumphantly. She pauses, allowing the final notes to echo through the room before fading away.

A shy grin spreads across her face and she whispers to Kate, “Did they see?” She wants to check whether we had noticed her captivating performance from across the room.

Later, after the music therapy session ends and Client N has gone home with her family, Kate explains that music is a great form of expression for Client N, who has a developmental disability and is going through life transitions. She is looking for aspects of control, and music is a wonderful therapeutic tool that offers these aspects of control while also allowing Client N to work on skills that help her to be flexible with others.

This session on the piano was a step forward for Client N. Normally, she starts her session by moving along with music, then she typically plays the piano for a short while. Kate is working with her to expand these moments, and today Client N showed progress by keeping her focus on the piano for far longer than she normally would. At times during the session when Client N becomes overwhelmed and begins to lose focus, Kate communicates with Client N using quick, small verbal and non-verbal cues, often meaning “stop.”

With many children, Kate says, the more words you use, the more information they are processing, and it can lead to escalation and a spiraling tantrum. Communicating through music and non-verbal cues can be a way to work through these overwhelming experiences and emotions without escalation. “Giving space is helpful,” said Kate.

What is music therapy? 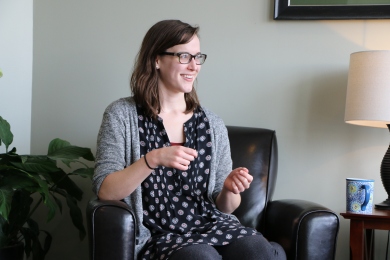 Kate, like all music therapists approved by Medicaid self-directed or family-directed plans, is therapy board certified. This involved completing a four-year undergraduate program and a six-month internship. Music therapy can benefit anyone, but at The Lotus Tree, they specialize in treating children with Down Syndrome, an intellectual disability, a traumatic brain injury, learning disabilities, cerebral palsy, autism, anxiety, and depression.

Medicaid clients who qualify under the Developmental Disabilities Waiver are eligible for My Voice, My Choice – Idaho’s self-direction program for adults. Families of children with developmental disabilities have a similar option known as Family Directed Supports. Self-direction is a program that allows clients to have more flexibility in the services and supports they choose and allows them more control over how they spend their Medicaid budget. One of the therapies available for clients in the self-direction program is music therapy.

Kate emphasizes that music therapy is not a treatment she would encourage to be used “instead of” traditional therapies – rather, it is an incredibly valuable research-based therapy that is beneficial when combined with traditional therapies. “There is so little we know about the brain,” she says. “But we do know that it reacts differently when we do music.”

What does music therapy look like? It may involve movement to music, playing various instruments such as guitar, drums, piano, xylophone, etc., singing, playing as part of a group, and writing songs or creating musical stories. It also can involve sensory equipment such as the hanging swings with compression fabric in the music room at The Lotus Tree.

During her sessions, Kate often helps a child into the compression fabric and then sings with them while they swing, or holds out colored drums and sings to them as they swing toward her, “Hit the… yellow drum! Hit the… red drum! Hit the… red! yellow! red drum!” These exercises require mental and physical coordination for the children. But as they are cocooned in the hanging fabric, swinging, and reach out to the drums to strike different tones that match different colors, the challenge is undeniably different from other skill-building settings.

Different ways of learning: the land and the sea, and the ABCs

Kate’s days are action-packed, and she often moves from one client session to another with no break in between. She typically sees eight or nine clients a day, ranging in age up to the age of 20. The needs of each individual child are complex, and she must make swift mental transitions between unique approaches and routines she has developed with each child.

After Client N, Kate meets Client T, who she has been seeing for over a year. They are working together on transitions, and on branching out from the routine they have established. He prefers to spend time in the gym first before moving into the music room to sing and dance to a fiery Spanish-style guitar song played skillfully by Kate.

Then, it is time for Client T to sing. He holds the microphone confidently and paces as he sings intensely, deliberately, in a style that is half song, half beat poetry. He seems to lose himself in the moment. Kate accompanies him on the keyboard, following his pace, giving him the space to think of every word and connect them together. She says later it was fascinating to see how he is processing the song in a completely new way than he has in recent sessions. He works through no fewer than eight verses of “Wheels on the bus” before slowly lowering the microphone as his finale. Later, Kate said of his performance, “Sometimes something just feels different.”

Soon after Client T leaves, Kate breezes barefoot through the hallway from the music therapy room toward the reception area, greeting parents and children all along the way. She has known many of them for years. In addition to being clients for music therapy, many come to The Lotus Tree for a wide range of other sensory therapies.

In the lobby, Kate greets Client W and his family. Today, Client W comes to his music therapy session with a new challenge: a cast on his right foot. He is full of boundless energy and needs a lot of sensory input. Although his cast doesn’t slow him down, it seems to be a distraction for him. As the music therapy session begins, he moves from instrument to instrument, sometimes temporarily ignoring Kate’s sing-song instructions to clean up before starting something new. However, they share hand gestures they have developed with each other, meaning “stop,” and he always returns to clean up his most recent instrument.

Late in the session, he belts out an entrancing rendition of “The wheels on the bus,” before running to the miniature piano to pound out some of his energy. He is so enthusiastic the piano topples over, and Kate explains to him that we must be a little gentler with the instruments.

“That hurts piano,” she calmly sings.

Always considering each child’s unique needs and the context of any given day, Kate does some quick thinking and comes up with a plan. After several minutes within the safe surround of a swing, Client W is able to sit quietly with Kate as they play ukuleles together.

Paraphrasing from the book “Music for Life” by Gary Ansdell, Kate describes the unique benefits of music therapy. “Speaking and music is like the difference between being on land or in water. Changing the medium you’re acting in, from land to water, or words to music, can change our perspective and how we interact. It puts things into a different context. It allows us to memorize and categorize in a different way. There is a reason we learn our ABCs through song.”

There have been several studies documenting the benefits of music therapy for adults, as well as children. One study documents a case of a woman who suffered from severe Alzheimer’s dementia and aphasia, a communication disorder that impairs a person’s ability to process language but does not affect intelligence. As her dementia progressed, her expressive language abilities declined, but her husband was certain she could still understand, and that it was “all in there.” He used music in his caregiving for her, and even when she could no longer have conversations with him, she was able to continue sharing her feelings with him by singing to him. Eventually, when she was unable to recognize her husband, she believed he was an intruder. But he brought her back to him by repeatedly singing “Unchained Melody,” a song they had shared as a couple for close to 60 years.

Kate has personal experience of witnessing the benefits of music therapy for adults, and she tells a touching story from her time as a music therapy student. Kate’s client had a stroke and subsequently suffered from aphasia. The woman was only able to say one word, but she longed to express her complex thoughts and feelings to her loved ones. As Kate worked with her, she began to experience magical moments of recovery. One day, Kate played a song to her she had known before her stroke, and she was finally able to softly sing the words to her children that she had lost for years: “I love you.”

Idahoans spoke; we listened. Music therapy is available to adults
and children on self-directed
and family-directed Medicaid plans

Music therapy was initially offered to both children and adults. However, as most of the evidence for its success was focused on children, the Bureau of Developmental Disability Services made the decision to discontinue it as an eligible service for adults. However, since that time, we have conducted further research on the success of music therapy for adults. The department also received numerous heartfelt, concerned testimonies from Idahoans via email, phone, and face-to-face with our staff and director. We listened. Director Dave Jeppesen has now approved music therapy as an eligible service for both adults and children who qualify under self-directed and family-directed Medicaid plans.

“After learning more about the value in music therapy, we are excited to change direction and make this an eligible service for adults,” said Dave. “I appreciate all of those who took the time to share with me exactly how music therapy has positively impacted their lives.”

One thought on “Music therapy: Helping us all engage in new ways”